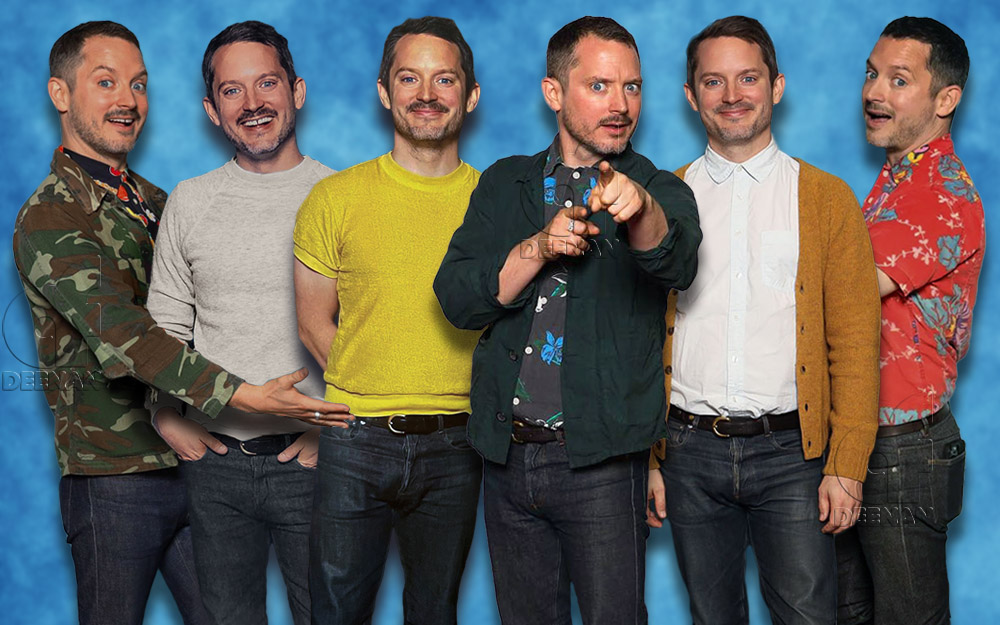 The final recap of the year starts with photos of the last of the conventions. Elijah and Sean were in attendance at LA Comic Con, and a final hurrah with all the guys joining up at Steel City Con. How lovely was it to see Elijah and Paula Abdul again? You can also check out both of their full panels on YouTube which were a lot of fun! [Los Angeles]  [Steel City]

It was revealed during the LA Comic Con that a T-shirt has been made commemorating The Hobbit Tour this year. The super awesome design is by Jess Rotter and of course, you can get your very own here! I’ve ordered mine! Half of the proceeds will go to One Tree Planted and Treebeard is happy about that!

The second season of Yellowjackets will begin on March 24th on Showtime and a third season has already been announced. Will Elijah’s character still be vital to the story by then? We’ll just have to wait and see. On the subject of premieres, a bit of an update on The Toxic Avenger. Director Macon Blair shared that the movie has been done for a while and he’s looking forward to a springtime release. Can’t wait!

Podcast Like It’s 1999 penultimate guest was Elijah as they discussed American Movie. You can listen to them geek out on this documentary here. While you’re in the podcast mood, take a listen to Back Pocket Films where they discuss Everything Is Illuminated, which is one of my favorite films from Elijah.

While I don’t believe he’ll be a part of it, Elijah played host in a trailer for The Lord of the Rings roleplay, Lost Odessey: The Red Scribe-Extra Life.

Want to stay in Hobbiton for only $6 a night? Of course, you still have to get to New Zealand, but how comfy-cozy does it look? Currently it’s sold out but one never knows when a cancellation may happen.

Chapter eight of Elijah’s unofficial biography which covers 2017-2019 was updated last month, and the latest chapter covering the years 2020-2022 is complete and ready for reading.

It’s that time of year again when a call goes out to those who would like to submit something to Always and Forever’s Age of Aquarius where we celebrate Elijah’s birthday on January 28th. Artworks, poems, videos, and greetings are welcome, so if you want to share something special for the birthday boy, the deadline to email submissions is Wednesday, January 18th. Remember that all submissions are subject to content, so please keep them appropriate and respectable.

There are some wonderful things ahead in 2023 for Elijah that we know of, and it’s the things that come along that surprise us that I’m looking forward to. One thing we all deserve is a grand celebration of the anniversary of The Return of the King. Whatever comes along, I’ll find myself in this assiduous place 12 months from now. As I’ve been accustomed to doing over the past decade and a half, my year-end video is posted for your viewing pleasure on YouTube. It’s been a very unCONventional year. There was so much to pick and choose to include in the video, so tick on the graphic below to relive what happened in 2022 and enjoy!